The famous actress Lindsay Lohan will be on the small screens again and with her wonderful acting skills, she will occupy the attention of the public. She will star in the new Holiday Netflix movie.

Netflix confirmed on Monday that the wonderful Lindsay Lohan will participate as the lead actress in the holiday romantic comedy, which was directed by Janeen Damian I produced by the streamer’s go-to Christmas pic producer MPCA.

We all remember Lindsay for her role in Mean Girls and The Parent Trap. Now we look at it in something completely different. In the new film, she plays a “newly engaged, spoiled hotel heiress”, who gets amnesia after a skiing accident. She “finds herself in the care of a handsome, blue-collar lodge owner and his precocious daughter in the days leading up to Christmas.” The rest of the cast is still unknown. Jeff Bonnett, Ron Oliver, Janeen Damian, and Michael Damian penned the script.

Her 11 years of fame is very well known to everyone and many have enjoyed her films. She followed that with a remake of “Freaky Friday” and “Mean Girls;” both roles cemented her status as an A-list star. For years, the paparazzi followed her because of their problems, which hit her hard. In the meantime, she moved and lived in both Europe and Dubai.

On CNN’s New Year’s Eve special back in 2019, before the pandemic devastated the entire world, Lohan told host Anderson Cooper and Andy Cohen that she wanted to return to America and start filming further, as well as wanting to return to the life she worked so hard for and to share it with her family and all the people.

According to Variety, though, the movie is not set to start shooting until November 2021, so we shouldn’t expect a Christmas 2021 release. Either way, we are all very happy and excited to see dear Lindsay again on the small screens, especially in this holiday spirit! 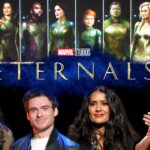